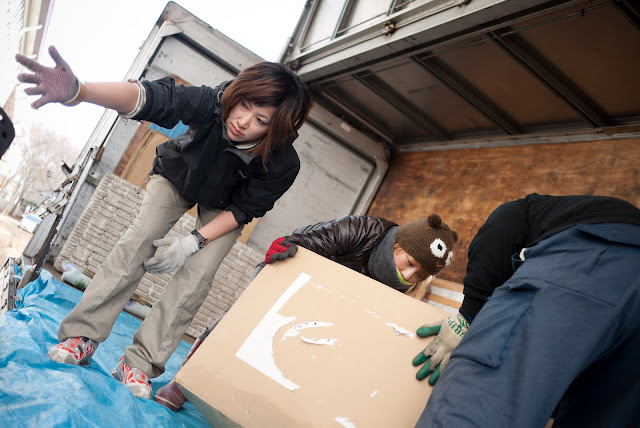 For this series, I’d like to walk through several of the various volunteer projects out there.  Volunteering in Tohoku involves many different types of work. Everything from gutting buildings – digging and scrubbing mud – gutting houses – knocking down walls – running community cafes – holding soup kitchens – clearing ditches – building shelves – unloading massive trucks – and so forth.
For today’s entry, I thought I’d quickly talk about the process of warehouse distribution. On Jan 26th, we worked with a team effort by It’sNot Just Mud and the On The Road project to lend support to DSP (DisasterSupport Project) to help move 130 tons of aid that was expected to arrive over a two-day period at their Warehouse facility in Natori city, just outside of Sendai. This one of their aid warehouses is based out of the gymnasium of a junior high school in Natori that was devastated by the tsunami.  Although the damage to the central building has resulted in it being abandoned, the gymnasium was cleared out, and now provides a space for hosting the incoming aid for distribution to refugee shelters until last Summer, and is now targeted aid relief for the residents of the Temporary Housing facilities. However, many of the prefecturally managed distribution centers will be disbanded on March 11th, following the first year anniversary of the disaster.

When unloading the trucks, there are several different strategies to handle the unloading process efficiently. Some teams prefer to set up distribution lines, and pass goods from one person to the next in long chains.  Other teams tend to rely on loading trailer carts until they are full, and then carting the supplies to their resting point. For heavy boxes, it's often easiest to form long lines, and to have people progressively push the boxes along the floor to reach the resting point.


The work load is reliant on the timing of the trucks to arrive. During the Summer and Fall the trucks generally arrive on time, but once the snow starts falling, truck arrivals become quite random.  On this day, we had to split up our lunch break into four separate sessions.  After a slow morning, we suddenly had an onslaught of three trucks show up almost as soon as the previous one had left.  Due to difficult traffic conditions, there was no way to confirm when the trucks should be coming.


Either way, it's quite satisfying to stand in a room with tons of aid, and knowing that it'll be helping out the residents of the temporary housing units in the near future.

Here is a video produced by our work team, courtesy It's Not Just Mud, with an entertaining view of the unloading/loading process. Please check it out!